A modern cave in Mexico: when architecture becomes invisible

The architectural mission, in this case, was to make architecture itself invisible.
So it was.
In fact, “La Colina in front of the Cañada“, built 25 km from the city of Morelia, in the state of Michoacàn (Mexico), is literally immersed in nature.

Designed and built by HW Studio with the help of engineer Antonio Rangel, despite the brutalist style, the construction is almost imperceptible from the outside.
Hidden and surrounded by land and vegetation, surrounded by trees, almost a modern cave, the house responds as completely as possible to the client’s request.

“The client wanted a refuge in the forest to disconnect from the city”, explains Rogelio Vallejo Bores from HW Studio. 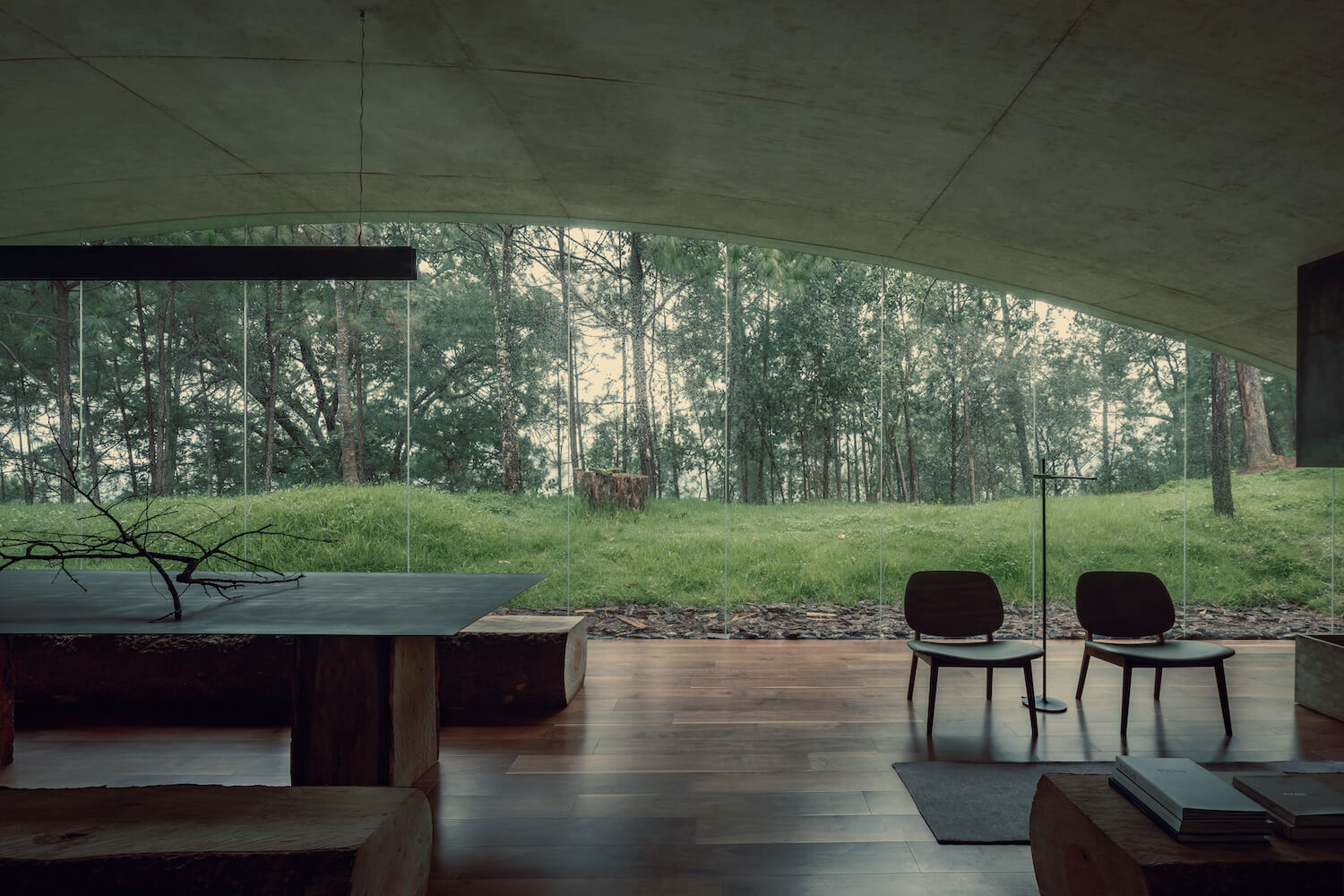 An order taken literally by the designers, who imagined the earth rising like a sheet to cover and protect this refuge, from which they later expelled the outside world to the maximum: no television, no internet, hidden lights and refrigerators.

“We are in a place without time“, emphasizes Bores.

“It was important,” he explains in the video, “that you couldn’t even perceive the architecture of the house and that, only at a certain point along the way, you began to glimpse something that hinted at the presence of a structure.”

The corridor that also hides the entrance between two walls is narrow, accessed by a staircase and emphasizes the sought-after solitude.
The interior is undoubtedly “minimal”: little furniture, soft colors, wood to balance the cold of bare concrete, steel for the fireplace, the door and the table.
Materials and colors, therefore, also reduced to a minimum, to accentuate the idea of essentiality. 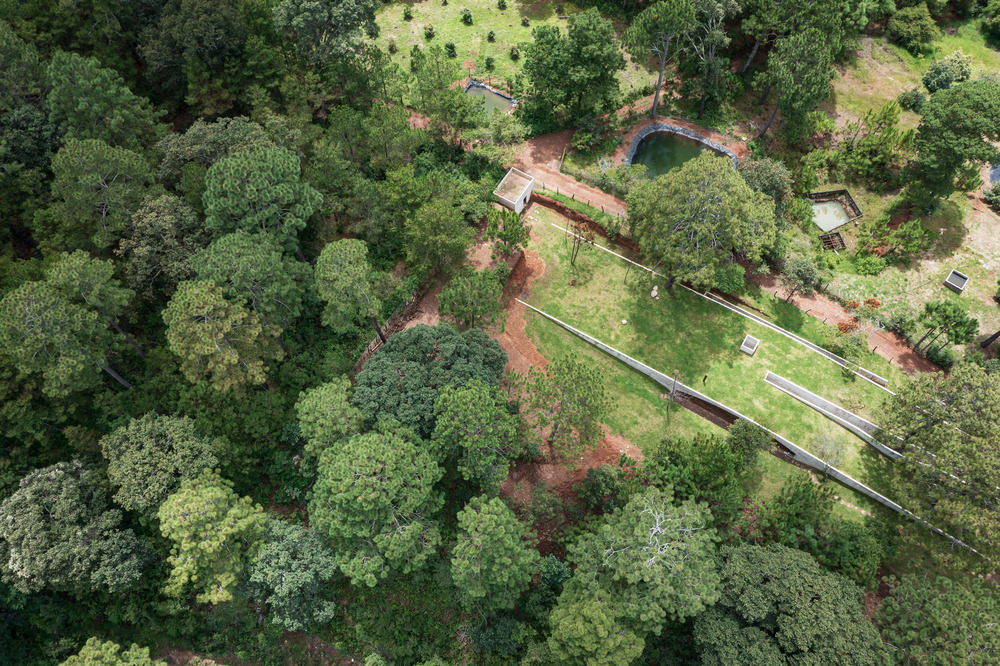 A minimalism with a clear oriental stamp, “trademark” of HW Studio.
Born in 2010, the studio was born with the intention of uniting East and West in art and philosophy, in search of peace, meditation and harmony.
The same name, they clarify on their website, was born “from the union of the letter H, which in Spanish is considered the silent letter, that is, the graphic representation of silence; and the W derived from the Japanese concept Wabi Sabi, a a concept that does not have a translation into Spanish, nor is it directly equivalent to any western concept, but that could be understood as the beauty of the impermanent”.

It is no coincidence that Roges refers to the house transformed, in the future, into a ruin.
From the imperceptible to the invisible, completely returned to earth, material for future archeology.
A praise, therefore, to what ends, to a cycle of birth and end, in opposition to architectural anthropocentrism, an ode to sustainability, not to leave a trace.

“If the forest had been our client,” Roges continues, “how would you like us to treat it? So we decided not to disrespect it. The same road that leads from Morelia to the site, provided us with the main suggestion: the architecture had to be so subtle as not to disturb the immersion in nature. The forest is still king. ”

With an area of ​​250 m2, the house opens directly to the outside through two side windows that facilitate the integration between the interior and the exterior.
On the one hand the living area, facing the forest, on the other side the bedroom area that overlooks a patio to give more privacy. 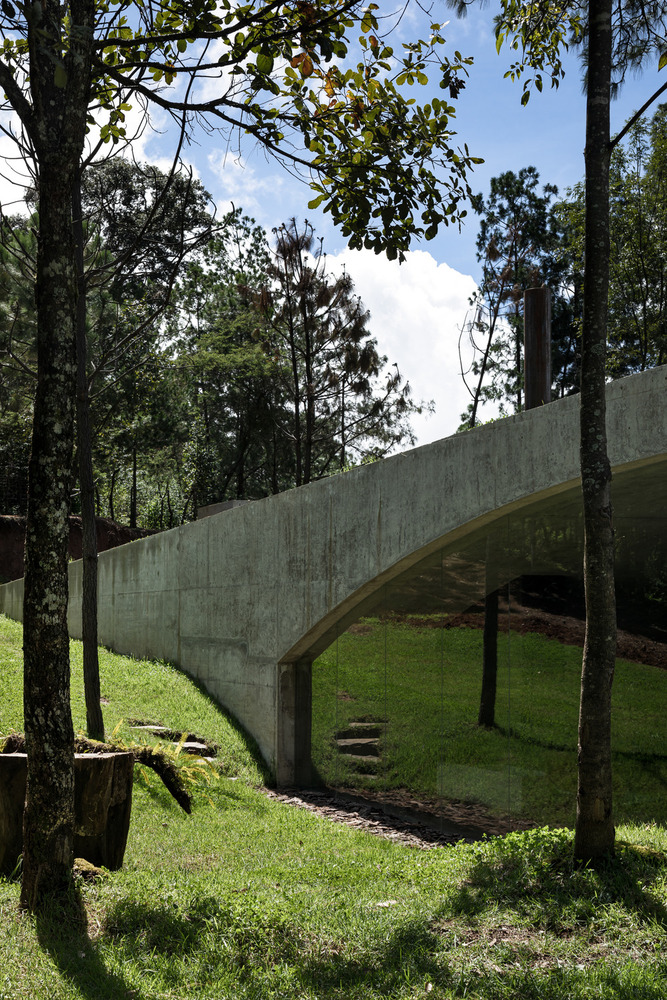 “The architecture”, explains HW Studio, “in this case should be the accent on the words of the poem, the comma, or in any case some question mark, but it should never be the poem itself. The poem was already given by the pines, oaks, huizaches, the fireflies, the path, the fence, the neighbor’s pool of water, the earth, the orchard and the nightingale. The accents in the poem were four concrete walls that emerged surprisingly from the landscape; they contain the earth of this new hill that was generated when lifting the sheet and two others that frame the access and escort the guest on his way to the interior of the house. “.

Poetry, after all, is simplicity.